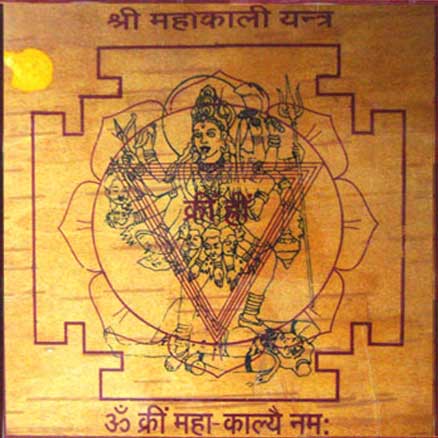 Mahakali Yantra is very powerful and tested Yantra. One should keep the image of Kali while performing puja on it. According to Swangam Tantra, Kali Tantra and Bhairo Tantra this Yantra is known as swanam Yantra, kali Yantra, Mahakali Yantra or Bhadra Kali Yantra. Goddess Kali in a fierce pose is deity of this Yantra.This Yantra bestows fulfilment of desires, wealth, comforts of life and is used for Mohani Vashikaran purposes. Lot of power is infused after Pooja and Yantra is capable of controlling enemies to not do any harm. A unique and powerful yantra.Maha Kālī is represented as the consort of Lord Shiva, on whose body she is often seen standing. Shiva laid in path of Kali, whose foot on Shiva subdues her anger. She is time manifestation of other Hindu goddesses like Durga, Bhadrakali, Sati, Rudrani, Parvati and Chamunda. She is the foremost among the Dasa Mahavidyas, ten fierce Tantric goddesses.